Home The latest from the blog Housing Market Update: Auckland

Auckland housing prices have finally slipped, creating more opportunities for house hunters. March recorded a slow market with houses taking longer to sell, increasing from 33 days to 36 days. The slowing down of housing market growth can be attributed to policymaker’s attempts at cooling the market.

Although activity is slowing, housing prices remain high around the country with the exception of Auckland whose median sale price fell 2.2 per cent to $880,000.

According to a report into housing conducted by Westpac, Auckland’s housing shortage is only going to continue to worsen for several years. The report shows that since 2012, the city’s population growth far outpaced that of building new homes, creating a shortfall of 30,000 homes.

The city’s population is estimated to grow by another 300,000 in the next ten years which would mean another 13,000 homes a year would need to be built in the next decade to accommodate them. Despite the current rate of 11,000 new homes built each year, there’s not enough to prevent and eliminate the shortfall.

The report also found that Auckland’s building industry has already reached its capacity constraints, due to difficulties accessing finance, rising costs and a shortage of skilled labour. Westpac says the ongoing shortage of homes in the Auckland region is likely to cause major changes in the housing market, including:

As housing shortages continue, rent prices in regional areas around the country have been pushed upwards. 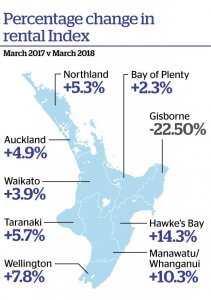 However, rent prices in Auckland tell a different story, falling by $10, although the demand for rental properties remains high with several properties receiving more than 100 enquiries within the first two days of being listed.

Are you moving soon?

Make sure you're prepared for the move with Grace's pre-move checklist. Filled with advice and requirements to ensure your move goes smoothly Get the checklist